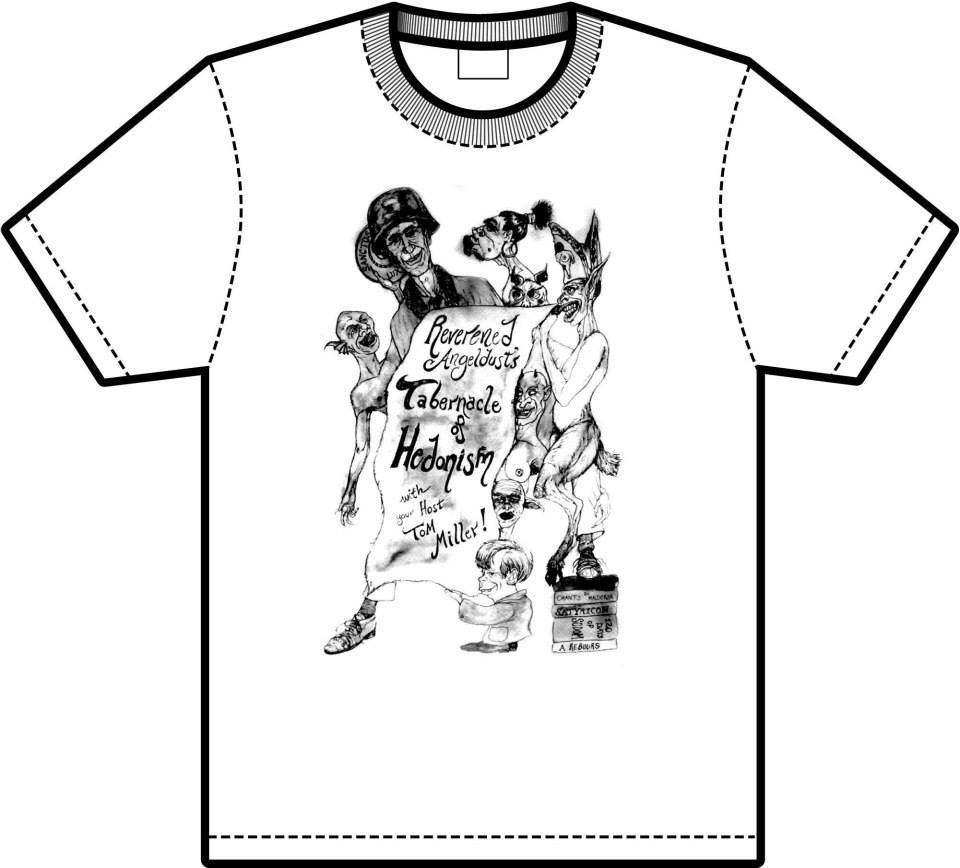 Tom Miller (born October 5, 1965 in Hialeah, Florida) is an American writer, artist, musician, actor, and performance artist. Beginning a career in Gainesville, Florida in 1984, his eclectic songs and performance elicit both laughter and shock from his audiences.

He is a published author of 50 Chapbooks, and has over 50 full-length “AudioArt” CDs to his credit. He is the director of more than 120 independent VideoFilms.

Miller is also known for notorious stunts including Gainesville’s First Naked Press Conference, a 17 hour marathon reading of Truman Capote’s “In Cold Blood”, Hosting a decade of Gainesville’s Hemp Fests, Painting portraits of Chief of Police Wayland Clifton as Elvis, a 35 hour Twin Peaks Television marathon, two hours staring into the mouth of Ted Cruz, The “Instillation” of Nothing Sculpture, and his frequent UFO Secrecy Protests.

The Tom Miller Show has been a staple of avant-garde entertainment in Gainesville, Florida for over 30 years, from 1984 to the present day, and is the longest running live variety show in the United States. Mr. Miller has received significant press coverage for his many writings, artworks, performances, and activism in Gainesville, Florida over the last two decades.

He continues touring with live performance art shows, poetry readings, videography, and currently is the official host of The Reverend Angeldust’s Tabernacle of Hedonism. Currently, Mr. Miller is performing a seven year performance art event entitled, “Professor Miller” in which he will become an academic Professor of Theatre by way of advanced collegiate study, at which time he will quit to return to what he was doing before, which was theatre. Mr. Miller is currently enrolled at the University of Florida. He has a 3.9 GPA and is on the Dean’s List and a member in good standing in a number of academic societies.

As an independent artist & musician, Tom Miller is the producer and author of some 50 CDs and some 50 chapbooks of poetry and novelettes, which he makes available through his “imaginary” record label, FREDInk Records, or through Miller’s personal web site at http://millerworks.weebly.com

Tom Miller generates private works exclusively through the kind donations of his many fans and supporters.

To contribute to Tom’s continuing efforts in the arts, e-mail Tom at [email protected] or donate here: http://millerworks.weebly.com/please-may-i-have-one-million-dollars.html

Favorite spot?
Maude’s Cafe – the Known Center of the Universe. And anywhere I can get a lobster.

Anything else…?
The Tabernacle of Hedonism: http://m.gainesville.com/article/20150101/ENT/141239962/0/Author?Title=Absurd-local-variety-show-celebrates-100th-installment-

And tell us about your secret site, since everyone knows?
http://millerworks.weebly.com/